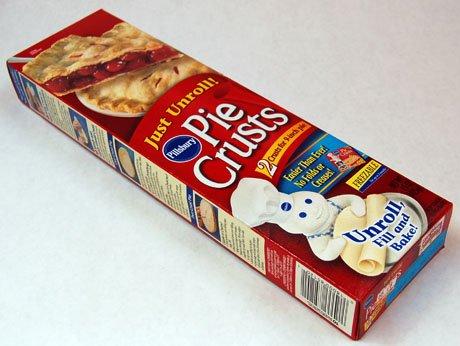 When I was growing up, my family didn't "do" dessert. I don't mean that we didn't eat it. We did, but dessert in our house meant one of two things: fresh fruit, or coffee-chip ice cream by the quart from Grunings, our local ice cream parlor.

There was no in-between.

And so, there was no pie, no making of pie crust, no learning how to criss-cross the lattice.

Eventually I learned to make a pie while working on an article about Little Brothers/Friends of the Elderly, an international community service organization that, among other programs, provides holiday meals to home-bound elders. It was November 1994, and I found myself in the kitchen with Rene Morrissette, the man in charge of getting hundreds of turkey dinners with all the fixings prepared, packed, and delivered by volunteers on Thanksgiving morning to more than 700 "old friends" in greater Boston.

A man who has to make 150 pies doesn't mess around with homemade crust, though he was a master baker who loved to do the from-scratch thing at home. No, Rene was a pragmatist who didn't want to sacrifice quality for quantity. He introduced me to Pillsbury Refrigerated Pie Crust, which General Mills introduced to the marketplace in the mid-1950s.

Preheat oven to 425°F. Press one pie crust into a 9-inch glass pie pan. Peel, core, and thinly slice the apples, and toss in a large bowl with the lemon juice. In a separate bowl, combine sugar, cinnamon, nutmeg, salt and cornstarch, and stir into the apples. Spoon the apple mixture into the bottom crust, and dot generously with the butter. Paint the edge of the crust with a bit of the egg wash, or with water, and place the top crust over the apples. Press down lightly, and crimp the edges (make sure there’s a good seal). Using a sharp knife, make a small hole in the top of the pie. Brush the top crust with egg wash, then make 4-6 slits in the crust. Place on the middle rack of the oven and bake 40-45 minutes. Apples should be tender and the crust a deep golden brown. If the crust is becoming too brown during baking, cover the edges with an aluminum foil "collar." Let cool on a rack for 1-2 hours before slicing, to allow the juices to set. Serve at room temperature.

Store-bought pie crust was a crime in my mother's house. She always made it with Wesson Oil. As awful as that sounds, it's really good.

I didn't say it was healthy.

Thanks so much, Marcia. Anyone else have a pie crust recipe (or recipe made with pie crust) to share?

Heat oven to 425. Prepare pastry. Stir together sugar, flour, orange peel, cardamom, brown sugar. Put half of rhubarb-strawberry mix into pastry-lined pan; sprinkle with half of the sugar mixture. Repeat with remaining rhubarb-strawberry mix. Sprinkle remaining half of sugar mix on top. Dot with butter. Cover with top crust which has slits cut into it. Seal and flute.
Sprinkle sugar on top crust.
Cover edge with 2-3 inch strip of foil, remove last 15 minutes of baking. Bake 40-50 minutes or until crust is nicely browned and juice begins to bubble through slits. Serve slightly warm. Nice with ice cream from We-Lik-It. !!

Chaump, my goodness, another Grunings fan! Favorite flavor? Mine was coffee chip. Thanks for visiting The Perfect Pantry.

Grunings was a place in South Orange, NJ owned by a German family who made home made candy and home made ice cream - the creamiest ice cream you ever tasted. Their Coffe Chip was yummy.They made everything is their factory in the back. We even took a field trip there in elementary school in the fifties. They had a restaurant where many of us stopped after jr high and hung out. They had the best ice cream sodas and french fries and good bologna sandwiches. In the late 80's I think the family sold out and Grunings was no more.

Nancy, welcome to The Perfect Pantry. I grew up in Plainfield, where there was another outpost of Grunings. I was a huge fan of coffee chip until one day when I had my wisdom teeth pulled. I couldn't eat the chips while my mouth was healing, so we switched to coffee fudge, and that became my lifelong addiction. Grunings was also a family favorite weekend lunch place, for old-fashioned grilled cheese sandwich and a milkshake. I do miss it.