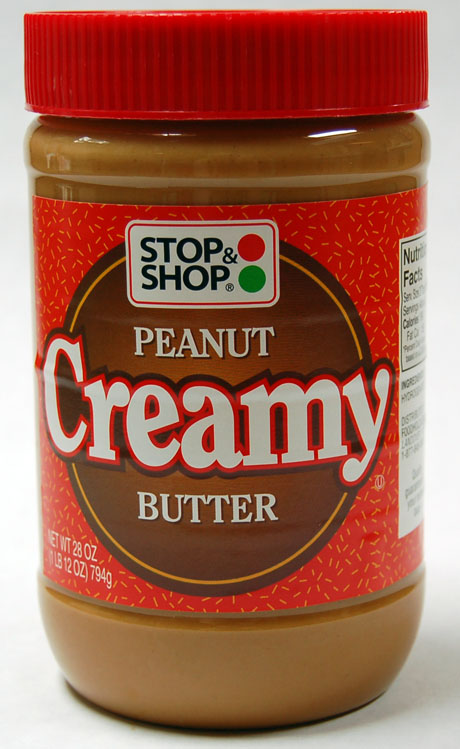 In 1890, an unknown St. Louis physician supposedly encouraged the owner of a food products company, George A. Bayle Jr., to process and package ground peanut paste as a nutritious protein substitute for people with poor teeth who couldn't chew meat.

Around that time, Dr. John Harvey Kellogg in Battle Creek, Michigan, began experimenting with ground peanuts as a vegetarian source of protein for his patients. His brother, W.K. Kellogg (yep, the cereal guy), was business manager of their sanitarium, the Western Health Reform Institute, but soon opened Sanitas Nut Company, which supplied foods like ground peanut paste to local grocery stores. The Kelloggs' patent for the "Process of Preparing Nut Meal" in 1895 described "a pasty adhesive substance that is for convenience of distinction termed nut butter."

C.H. Sumner introduced peanut butter to the world at the Universal Exposition of 1904 (World's Fair) in St. Louis, and in 1922, Joseph L. Rosefield began selling in California a product that was churned like butter so it was smoother than the gritty peanut butters of that time. By 1928 Swift & Company had brought Peter Pan to market.

Except for a stabilizer here and there, peanut butter hasn't changed much in the past century. It contains, by law, a minimum of 90% peanuts, with no artificial sweeteners, colors or preservatives. Some brands add natural sweeteners and salt, plus a stabilizer to keep the peanut butter fresh and the oil from separating. "Old-fashioned" or "natural" peanut butter does not have the stabilizer, so the oil does separate and should be stirred back in before using.

Warning: this sauce is addictive! Based on a recipe from Nina Simonds' Asian Noodles, one of my all-time favorite cookbooks. Double the recipe and keep it on hand in the refrigerator for up to two weeks, though I doubt it will last that long. Great for dipping Vietnamese salad rolls, slices of cucumber, or grilled chicken. Thin with a few Tbsp of water to use as a dressing for noodle salads. Makes 3-1/2 cups.

In a food processor with a metal blade (or in a blender), finely chop ginger and garlic. Add remaining ingredients in the order listed and process until smooth. It should be the consistency of heavy cream. If too thick, add more water. If too thin, add more peanut butter. Keep in the fridge in a covered container.

Just discovered your blog and I'm really enjoying it.

Kalyn, welcome to The Perfect Pantry!

In Indonesia, this spicy peanut sauce - or one very much like it - is used as a warm "dressing" for a vegetable salad - it's great, and it's called gado-gado. Pronounced with a long "a". (In Indonesia there are a lot of doubled words, some of which make perfect sense: "jalan" means "street", "jalan-jalan" means "walk"....)

Three pounds per year??????? Someone must be eating my share because I don't think I've eaten that much in my lifetime. I must admit to tasting the Chinese peanut sauce and liking it. I might be a convert.

Fran, thanks for explaining the doubled words in Indonesian -- I always wondered about that. We noticed similar uses in Malaysia. What would be in a typical gado-gado salad?

Pauline, I agree about peanut butter. But for this spicy sauce alone, I keep it in the pantry.

Well, I must be eating several people's allotment of peanut butter.. I'm sure I eat much more than 3 pounds!! A lot of it in peanut sauces.

I see you show a generic store bought brand. Do you find a difference in taste between brands? Or are you trying to avoid the Skippy/Jif discussion?

BTW, Kaylyn pointed me your way.

Debra, welcome to The Perfect Pantry! Will you share one of your favorite peanut butter-based sauces with us? I don't eat peanut butter on its own -- I always use it in sauces -- so I tend to buy the generic. Do you have a preference (Skippy/Jif/organic/natural/homemade)?

does anyone know how long "natural" peanut butter lasts? I know that unopened normal PB lasts a long time, probably around 8 months, but I'm not sure about the natural version. I found it on sale a week ago, stocked up, but later I noticed that there's a "sell by" date that's basically only a month away!

Stefania, I have some natural peanut butter that was opened at least 6 months ago and it still tastes fresh. I keep the jar upside down to make sure air doesn't get into the jar.

Stefania, welcome to The Perfect Pantry. I'd think your PB would last a few months, at least. The sell-by dates on packaged goods often are quite conservative. (Example -- I used some all-natural yogurt last night that was a month past the sell-by date, but had never been opened. It was fine.) When in doubt, try calling the company; the phone number should be on the label.

Pauline, love your storage method! Thanks for the tip.

I found your site while looking for info on some peanut butter jars (tumblers, glasses)which I found at the site of a loggers camp which was used in 1912. The jars are identified on the bottom with the Inscription, Swift & Company USA PAT FEE 10 03.I can confirm the date of the logger's camp as 1912. When I was a child, these were used as glasses for drinks at meals by the poor and middle class people here in William Faulkner's Yocnapatawpha County, Mississippi

Rev. Metts, thanks for sharing your search with us! What a wonderful piece of history you've found.