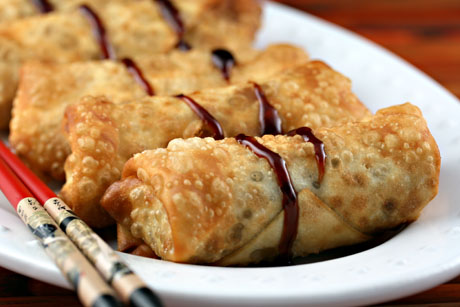 Utopian idealist and German inventor Rudolf Diesel had a dream. When he demonstrated his new engine at the 1900 Paris World Exposition, it ran not on petroleum, but on peanut oil. 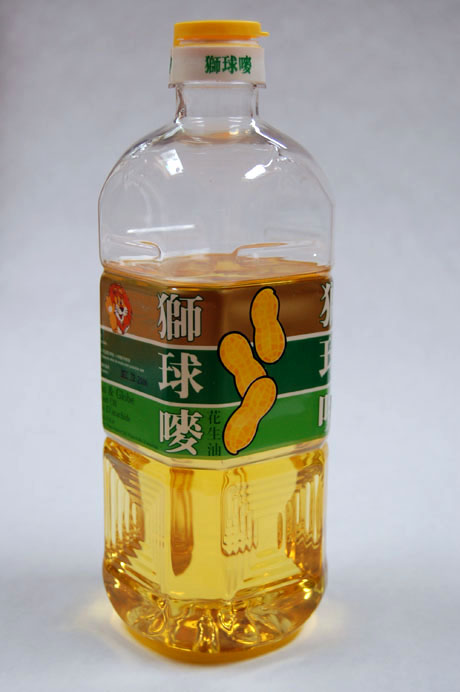 Low in the saturated fats that can elevate cholesterol, peanut oil is made by passing cleaned peanuts through hullers to separate the kernels; the kernels, which contain 48-56 percent oil, are then crushed, heated and pressed in hydraulic presses. The extracted oil is used in the manufacture of margarines and shortenings, and as a cooking oil. The leftover shells become cattle feed. Two-thirds of the world's peanut harvest is processed for peanut oil.

Most American peanut oils are mild-flavored, whereas Chinese peanut oil, less heavily refined, has a nuttier flavor. It's used in Asian cooking much like olive oil is used in Mediterranean cooking, as an all-purpose frying oil valued for its high smoke point. Smoke point is the temperature to which an oil can be heated before it begins to smoke and discolor, which means the oil is decomposing. Peanut oil's smoke point is 450°F, compared to extra-virgin olive oil (405°F), canola oil (400°F), and butter (350°F). For stir-frying, a small amount of sesame oil (smoke point 410°F) is sometimes added with the peanut oil, to enhance the flavor of the dish.

Peanut oil, my choice for frying everything from tofu to latkes, is a bit pricey in the local grocery store, but is half the price in our Asian market. And the packaging, with a smiling lion's head and those giant peanuts, is irresistible. 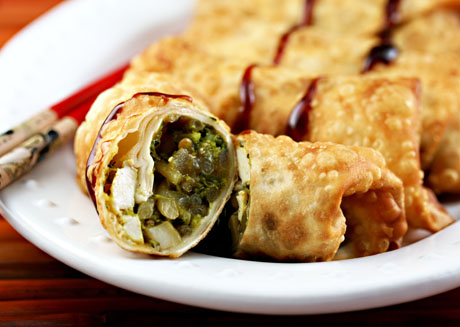 Kim's college friend Ingrid introduced her to a version of these wonderful eggrolls, and Kim taught me how to make them. Feel free to substitute shrimp for chicken, or to omit the meat entirely and add in chopped water chestnuts and bamboo shoots. This recipe makes approximately 75 eggrolls; they can be frozen and reheated in the oven.

TO MAKE THE FILLING:  In a nonstick frying pan or wok over medium-high heat, saute onion in 2 Tbsp peanut oil for 2 minutes. Add chicken, and cook for 3 minutes, turning constantly. Add broccoli, mushrooms and bean sprouts, and cook 5 minutes. In a small bowl mix oyster sauce, soy sauce, sesame oil and sugar substitute, and add to broccoli mixture. Cook for 2 more minutes, stirring constantly, and set aside to cool for 10 minutes or more.

Fill wok half way with remaining peanut oil (or if you have a deep-frying contraption, use that), and heat to a medium-high temperature. While the oil is heating, begin to fill the eggroll wrappers. Place 1-2 tsp of filling in the lower third of a wrapper, fold the bottom up over the mixture, then fold the sides in and roll the wrapper. Seal with a dab of water. (Folding directions are on the back of the eggroll wrapper package.) Fry 3 or 4 at a time for 2 minutes, or until golden brown. Drain on paper towels. Serve with plum sauce.

That sounds great. Max's spanish teacher at school makes eggrolls for special occasions and the kids rave about them.
I really need to get a good ventilation hood in my kitchen though. When we used to make Buffalo chicken wings, we would set up our little electric "fry daddy" and cook them outside on the deck. I wonder if we still have that thing...

I used to fry clam cakes in peanut oil in my "fry baby" on the deck of the boat. It was a treat for Texans who had never heard of "chowder and clam cakes". I tried replacing the "fry baby" a couple of years ago but it's not in production. Don't do much frying these days but I keep peanut oil to flavor bread recipes I make in the bread machine.

Oh man this looks delicious! And your photographs are beautiful! Everything here looks great!
I recently launched my own blog, I'd love for you to check it out and let me know what you think! :) Thanks!