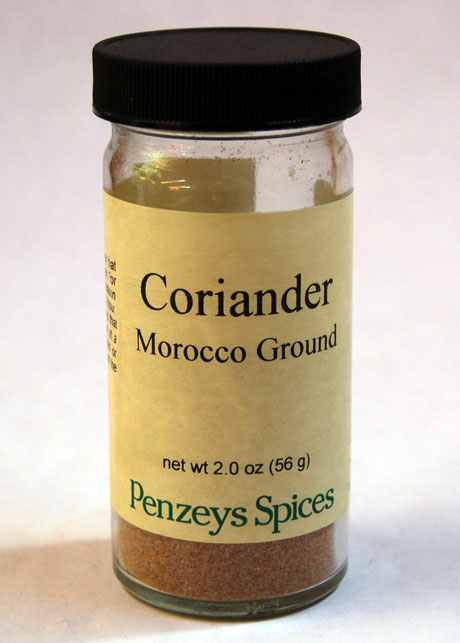 (Our granddaughter Sabina knows that all good stories begin this way.)

Once upon a time, the Sultan Schahriah, who had caught his sultana cheating on him, resolved to marry a different woman every day — and to have her beheaded on the following morning, so no wife could ever get the chance to be unfaithful to him again.

(Sound familiar? It's the premise of The Thousand and One Arabian Nights.)

Scheherezade, daughter of the Grand Vizier, begged to become his next wife, so she could put a stop to this nonsense. To forestall her own death and the death of any other unlucky bride, she crafted a story-within-a-story so intriguing that, night after night, the Sultan spared her life.

In one tale, she told of a merchant, childless for forty years, who was "cured" by a love potion containing coriander. And though this story was very old (the tales were first published in Arabic in 850 AD, from stories handed down through generations before that), Scheherazade might have gotten the idea from the Chinese, who for thousands of years had used coriander as an aphrodisiac.

Coriander — both the leaf and the seed have the same name; cilantro is the Spanish name for the fresh herb — may have been named after koris, the Greek word for "bedbug", as it was said they both emitted a similar odor. Maybe  not, according to some scholars, but I'm one of those people who doesn't like the taste or aroma of fresh coriander (it smells like bedbugs to me), so I like this theory.

Native to western Asia and the Mediterranean, coriander is cultivated in eastern Europe, India, the US and Central America, and it features in the cuisines of all of those regions. After the seeds are thoroughly dried, they're often roasted before being ground with other spices to form the basis of curry powders, masalas, harissa, ras el hanout, advieh, baharat, and dukka.

Coriander combines well with fruits of this season (quince, pear, apples), and with potatoes. Considered one of the "sweet" spices, it finds a home in the kitchen pantries of Mexico, France, Cyprus, Russia, North Africa, the West Indies, Iran and India, where it's cooked into dishes so intriguing that Scheherazade's Sultan would, I'm sure, have loved them.

An easy and unusual appetizer, great with pita chips or crackers.

In a food processor fitted with metal blade, or in a blender, combine all ingredients and blend for one minute or until well mixed. Serve at room temperature.

Yeah, Penzeys. Thanks for linking to me as a cilantro fan, keeping my cilantro-loving reputation intact. I love the sound of this dip. But what if I put cilantro instead of the parsley? That would only make it better, wouldn't you think? (Okay, I'm only partly joking, although I think that parsley and cilantro can often be interchangeable, at least for some people!)

There's an interesting comic book about out about Scheherazade too - by our friend Megan Kelso. Scheherazade: Comics About Love, Treachery, Mothers, and Monsters: (http://www.powells.com/cgi-bin/biblio?isbn=1932360549)

I love coriander. My father was born and raised in Tunisia so it is a basic component of his cooking.

Thank you for all the informations.

Kalyn, you are the queen of cilantro, and Pantry readers should know it!

Kim, thanks for the link. I love that there are comics about everything now. You do have the most talented friends!

Aurore, welcome to The Perfect Pantry. I'd love to know of some Tunisian recipes; it's a new cuisine for me.

One of the things I learned from Michael Ruhlman's latest book (The Reach of a Chef) is the importance of toasting spices to bring out their essence. It makes good sense, and all the "good" chefs know to do this.

I do anything Mr. Ruhlman says, you know?

Tana, I don't always think of toasting when I'm starting with ground spices that are not going to be cooked (obviously I'm not one of the "good" chefs -- too lazy, and not enough talent!). When I toast, I start with the whole spices and then grind them in the coffee grinder (that I never use for coffee). Next time I make this recipe, I'll try the Ruhlman way.

Thank you ! I certainly will as soon as I have something written down.

I love Penzeys spices! I also believe in a well stock pantry. Now I know where to go to check out pantry stuff.

Ah, Penzeys! A friend of mine sent me their Cocoa Lovers gift box once - jars of natural cocoa, dutch process cocoa, sweet china cassia cinnamon and vanilla sugar - in a wee box, padded with nutmegs and bay leaves. Fantastic quality but, when you live in Ireland, a bit expensive to keep importing!

Caroline, welcome to the Perfect Pantry. Lucky you to have a friend who sent you the Penzeys goodies! I love their cinnamon, too.