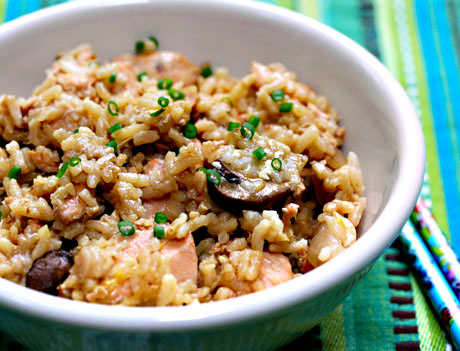 Are you confused? Is the distinction in name only, or are different kinds of soy sauce really different?

And is there one perfect soy sauce for the perfect pantry?

I keep seven (no kidding -- I counted) kinds of soy sauce in my kitchen: Japanese reduced-sodium and tamari; Chinese light (not "lite"), dark and black; kecap manis, a thick, sweet soy from Indonesia; and a mushroom soy made from shiitakes. Kikkoman Less-Sodium is my everyday soy, the one I add to stir-fry dishes, soups and marinades, but each has individual qualities that bring authenticity, texture and flavor to my cooking. Each sauce merits its own bit of pantry shelf space, its own day in the spotlight. 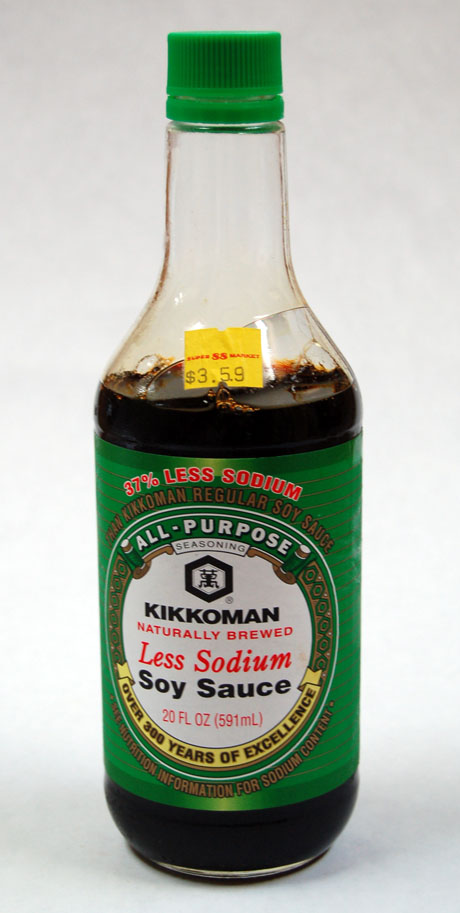 Soy sauce originated in China (where it's called jiang) more than 2,500 years ago, and gained popularity when China's Buddhist rulers decreed that vegetarianism should become the dominant culinary culture. The need for a meatless seasoning prompted the evolution of a salty paste of fermented grains, including soybeans. In the 7th Century, Zen monks brought soy sauce to Japan (where it's called shoyu).

Though there are many different formulations of soy sauce, there are only two main types: naturally brewed, and non-brewed.

Non-brewed soy sauce is produced by boiling soybeans with hydrochloric acid for 15 to 20 hours. After most of the amino acid is removed, the mixture is cooled to stop the hydrolytic reaction. The amino acid liquid is then neutralized, pressed through a filter, mixed with active carbon and purified through filtration. Color, flavor and "mouth feel" are introduced to this hydrolyzed vegetable protein mixture by adding caramel coloring, corn syrup and salt. The mixture is then refined and packaged.

In contrast, the natural brewing of soy sauce happens in three stages that result in an aged, more complex and smooth-tasting condiment. Here's how Kikkoman explains the process on their web site:

1. Koji-making: To begin the process, carefully selected soybeans and wheat are blended under precisely controlled conditions. Next, a proprietary seed mold is introduced, and the mixture is allowed to mature for three days in large, perforated vats through which air is circulated.

2. Brine Fermentation: The resulting culture, or koji, is then transferred to fermentation tanks, where it is mixed with saltwater to produce a mash called moromi. The next, and perhaps most critical step, is allowing the moromi to ferment for several months using osmophilic lactic acid bacteria and yeasts. During this time, the soybeans and wheat are transformed into a semi-liquid, reddish-brown "mature mash." It is this fermentation process that creates the distinct flavor and fragrance.

3. Refining: Following the months of moromi fermentation, the raw soy sauce is separated from the solids by pressing it through layers of filtration cloth. The liquid that emerges is then refined, pasteurized and packaged as finished soy sauce.

Kikkoman's Less-Sodium Soy Sauce has become a family favorite. It doesn't have the chemical taste of other low-sodium brands, because it's produced the same way as regular soy. However, after the fermentation process is completed, approximately one-third of the salt is removed. Although there is less sodium, all the flavor remains, because the sauce is aged before the excess sodium is extracted. 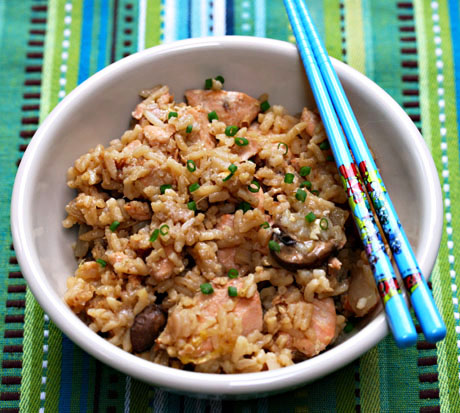 A dish created by accident, now a family favorite. One day when I was improvising a fried rice dish with leftovers, I reached into the fridge for a box of storebought chicken broth, but pulled out mango nectar instead, and before I realized it, I'd poured it into the wok! With a bit of soy sauce, it became a kind of Polynesian dish — not what I'd intended, but delicious. Note that this recipe calls for cooked rice; if you don't have any leftovers, prepare rice in a rice cooker according to package directions, and let it cool slightly. Serves 4 as a main dish.

Heat a well-seasoned or nonstick wok, and add the peanut oil and scallions or onion. Stir fry for 30 seconds, and add salmon. Stir for 1 minute, or until salmon is lightly browned on the outside. Add mushrooms and sesame oil, and stir for one minute. Add rice, and stir for 2-3 minutes, until rice is heated through and grains are separated. Add remaining liquids, and stir until well mixed. Serve hot.

I really like salmon and have made it with some maple syrup and soy sauce (broiled a whole filet). I sometimes pan fry a salmon filet after layering on some dill, garlic powder and then, sear it in olive oil and turn it over and add soy sauce. It's a quick and easy recipe. I do wish I would eat it 3 times a week..oh well, those omega vitamins will hopefully work as well.

Pam, I love the combination of salmon with something sweet, which is why the mango nectar in this recipe was such a happy accident!

I ate one time had no fewer than 5 bottles of soy sauce in my fridge, but now that I can't eat gluten I keep only one - Gluten-Free Tamari. One size fits all. That recipe looks amazing!

Gluten-Free, Welcome to The Perfect Pantry, and welcome to blogging. (I'll be watching for your kasha varnishkas recipe -- it's one of my favorites, too.) Good to know there's a good Gluten-Free Tamari out there. Thanks for the info.

It's actually "jiang you" in mandarin. If you don't add the "you" you could be refering to any type of sauce. I could also give you the tones to the words, but I think that's a bit too much ;-)

Rose, thank you so much, and welcome to The Perfect Pantry. Do you have a favorite among all the kinds of soy sauce?

Love soy sauce; bet The Husband and Nicholas would love this dish.

To be honest, I find most soy sauce too similar to differentiate any real difference.

However, in the US we only get a very small portion of the soy sauce that's on the market in asia.

Now that I'm living in Asia, I'm trying to test out a few more brands, but from my understanding, the japanese still makes some of the most outstanding soy sauce. It's a bit of national pride for them.

We use wheat and soy as raw material of koji, Does the gluten in the wheat can be breakdown in the fermentation process?

This recipe looks outstanding and I now have a huge chunk of salmon a neighbor gave us yesterday. The time is perfect!

I just made this last night and LOVED it! I made a few changes like using brown jasmine rice instead of the "Nishiki or other short-grain rice" and I added maybe 2 Tbs. of toasted sesame seeds for an extra sesame punch and some more fiber. This recipe is a keeper.

Molly, I'm so glad you loved this recipe. It's one of our favorites, too.