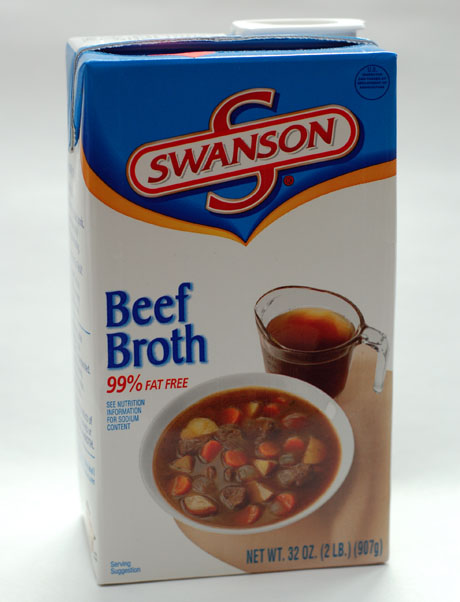 And without French onion soup, or pho, or vegetable-beef soup or beef stew ... oooh, I don't even want to think about it.

Seems like I'm always making chicken stock — roasting a bird, tossing the carcass into a pot with some aromatic vegetables and water — but I can count on one hand the number of times in my cooking life that I've made beef stock.

I think it's dem bones.

When every family did its own butchering, bones were abundant. (Actually, I grew up in New York City, where we didn't butcher anything except an occasional culinary experiment.) I never seem to have leftover beef bones, so in order to make stock, I have to buy bones.

Instead, I keep beef broth in my pantry. I don't use it often, and when I do, I usually combine it with homemade chicken stock. Now you know the secret to my own French onion soup.

When I travel, I look for local cookbooks and wooden spoons to bring home as mementos. This recipe is adapted from Southwest Indian Cookbook: Pueblo and Navajo Images, Quotes and Recipes, by Marcia Keegan, a photojournalist who collected these recipes during her 20 years of travel throughout the Southwest. For more great soup recipes, visit A Veggie Venture, which features amazing soups from around the world, through the end of this month. Serves 6.

Sauté onion in oil in a large heavy saucepan, until onion is slightly wilted. Add lamb, water and broth, and simmer until tender, 1-1/2 to 2 hours. Add corn, salt and chile, and cook until tender (if you're using canned hominy, cook for at least 20 minutes).

Shank bones for beef stock require a little discovery process to find and they aren't as inexpensive as they once were.

I love making my own stock, but I do keep this very same product on hand too for those times I run out. No doubt about it though, the homemade stock is sooooo much more flavorful.

I'll admit I don't make homemade beef stock (maybe it's just too anti-vegetarian for me), but I like your insights about dem bones. And about the French onion soup... your secret is safe with me. ;)

I believe I keep this company in business!

Lydia ~ Dare I admit in this august company that I've never made beef stock? Someday! This is another great contribution to Soup's On -- thanks so much for the inspiration!

Tanna, I've found the bones to be very expensive in my local market. I really can't understand why.

Kalyn, homemade is always best. I wish I were as diligent as you about saving your scraps in the freezer to make stock.

Susan, I adore French onion soup, so I doctor the beef broth with chicken broth and wine (oops, another secret!).

Jann, for packaged stock, I do like the taste of Swanson best.

Alanna, Soup's On is the inspiration! A whole month of soup -- what could be better than that?

ooooh i know what you mean. good beef stock. mmmmm!

I also use a combination of beef stock and chicken stock in my French Onion Soup recipe :o)

I also keep a good supply of beef broth lying around, you never know when you're going to need it!

I rarely make beef broth. I think it does require nice bones and I don't eat much beef at all. I can buy "soup bones" at the store, but they can be shockingly expensive for an item my mom used to get free from the butcher!!! Wonderful recipe, by the way!!!

Aria, I agree -- there is no substitute for good stock.

Tom, thanks for the clarification. I tend to use the terms "broth" and "stock" interchangeably, but you are absolutely right about the difference between the two. I'm not crazy about Kitchen Basics, personally, but it's really a matter of taste. Nice that there are many brands to choose from.

Allison, I had never tried hominy until a woman from New Mexico moved next door to us and introduced me to it. This is a very hearty soup.

Sher, I really resent how expensive beef bones are! After all, wouldn't the market probably just throw them away? I remember when chicken necks and backs were super-cheap, too -- not so anymore.

Lydia, I also combine stocks sometimes, not from design but from necessity. Anyway, I've done the same thing with French onion soup and I think it deepens the flavor, adds another layer.

Nothing wrong with keeping beef broth on hand for emergencies.

I loved this post! I think making beef broth is one of the most enjoyable things. I've only discovered the joy of making it recently, but I can't imagine so many dishes without it!