« Another Bookworm in the Pantry | Main | Yeast (Recipe: oly koeks) » 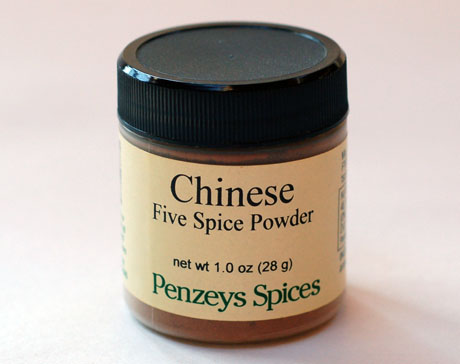 Star anise, clove, fennel, cinnamon (or cassia), and Szechuan pepper comprise the only common spice blend in Chinese cookery. India has its masalas; the Mideast and Africa give us berbere and baharat, harissa and ras el hanout. From France comes the incomparable quatre-epices. And America offers barbecue dry rubs of infinite variation, and crab boil.

In China, there's really only five-spice. Which is sometimes seven-spice, with the addition of cardamom, dried ginger, or licorice root.

Most popular in the cooking of southern China (and also Vietnam), five-spice powder may have originated as an attempt to create a "wonder drug" that brought all of the five elements into harmony, balancing yin and yang.

Each of the spices contributes an important flavor to the mix, though the dominant taste and aroma may be the star anise, with a licorice-like taste and a slightly bitter undertone. Cinnamon, fennel and cloves provide sweetness, but also a pungency. Szechuan peppercorns contribute a spicy, peppery taste that mellows to sour and salty.

Five-spice pairs well with meats such as lamb, pork and beef, which have strong flavor of their own, and with tofu, which has no flavor of its own. Generally, this spice blend will overpower vegetables, unless it's combined with other seasonings, but how about five-spice cookies?

A little goes a long way, so unless you are wokking up a storm, I'd suggest buying this spice blend in small quantities (or buy a larger, more economical amount and share with friends). Penzeys sells a one-ounce jar for $2.59.

You can make your own five-spice, of course. All you need is a small skillet and a spice grinder (a.k.a. coffee grinder dedicated to spices) or mortar and pestle. Adjust the proportions and taste, until your yin and yang approve.

The dip, inspired by a recipe in Vegetarian Appetizers by Paulette Mitchell, would be equally good with grilled or roasted vegetables (how about roasted sweet potato spears?). Serves 4.

Place first seven ingredients in a blender, and process until smooth. Adjust seasonings to taste, and set aside.

Arrange vegetables on a platter, and serve with the dip.

Wonderful write up on 5 spice. The dip recipe looks awesome!

Eeek! I can't decide if I want to play with a tofu recipe or not - it's such scary stuff!

The lime, soy sauce, peppers, all make this sound delicious.

Tanna, thanks for stopping by!

Scott, how about substituting sour cream, or yogurt, for the tofu?

I love your new header. This blog just gets better and better!

Penzeys!! I used to have this in my pantry! Now, after reading that wonderful recipe, I need to order some! :):)

Wow Lydia, you seem to have very impressive knowledge of Chinese cooking! Incidentally, I am making some sort of Chinese pork sausages with lots of 5-spice powder today, have yet to fry them up! :) Not sure whether I'll blog about it 'cos it isn't all that pretty. By the way, I like how you only give pictures of the stuff in your pantry and not pictures of the finished dish! Great idea!

Kalyn, thanks so much. Your blog is my inspiration! Keep watching over the next couple of months as the pantry shelf in the banner fills up (proving once again that there's always room for more!).

Mimi, high praise from a fellow journalist. Thank you.

Sher, Penzeys seems to have most everything, and they're adding products all the time. I was thrilled when they started carrying more Asian spices.

Shilpa, when I moved to Boston's South End (more than 25 years ago), I discovered great Asian grocery stores just a couple of blocks from my house (and a wonderful Syrian grocery as well). So it was easy to begin to experiment with Chinese spices and condiments. There's still so much I don't know. I love doing these "iconic" photographs -- there are so many wonderful blogger/photographers like you, and my prepared dishes rarely seem to look as beautiful. So I decided instead to show people what my actual pantry items look like -- the new, the used, the plain and the fancy. I'm so glad you're enjoying them!

I like a little bit of 5 spice...too much tastes ick to moi

I agree with Scott, tofu terrifies me a little, too.

I loved the explanation on Chinese five-spice powder - I've seen in many recipes (even gingerbread ones) but never knew what it was for real.
Thank you!

Such an appropriate post Lydia. I learned a ton!

I am in a Morrocan phase these days and was all about ras al hanout yesterday ;-) And looking for specific spices, was wondering about names of spices companies. Penzeys was one I could not remember the name of! Any other good ones you could think of? I am looking to buy Tonka beans!

Jeff, I agree. The star anise flavor can be overpowering, but just the right amount gives a hint of pungency that is delightful.

Patricia, the thing about tofu is that it has absolutely no taste of its own. If you compress the water out of it, it has the consistency of cheese, and carries the flavors of the rest of the dish. No need to fear!

Bea, you are lucky to live near a Penzeys store (in Arlington, easy to get to off Route 2). Definitely go and sniff some of the spices. For beans... maybe the markets in Central Square (there are two good Indian markets). Or a drive to New Bedford and Sid Wainer/The Gourmet Outlet, which is a treasure trove of fabulous foods. Happy hunting!

i have been wondering what was in 5-spice for a long time, after i came across a scallop recipe calling for it. i definitely need to add it to my pantry!

I love five-spice powder! We usually call this chinese pepper. It's phenomenal on pork roasts too.

all the cool kids get their spices at penzeys. i need to get with the program! recipe sounds delish!

I can't tell you how informative your blog is!

Our kitchen is never without five spice powder. And while we do use it in Chinese cooking, it also earns its keep livening up various non-Chinese dishes, especially meats. Try sprinkling a little on chops and pan searing them.

Lydia, kudos to you. This is one chinese spice I can't live without. I use it for meat braising, marinating, and its simply god send. I've made this popular Malaysian Hainan chicken recipe using five spiced powder. Check out the recipe (under poultry), hope you like it :) Yayy..more for perfect pantry :)

Another ingredient that is new and exotic to me! I would love to have some of this on hand for my frig-cleaning stir-fries :) Love the dip recipe too.

Another ingredient that is new and exotic to me! I would love to have some of this on hand for my frig-cleaning stir-fries :) Love the dip recipe too.

Aria, you really have to get on the Penzeys bandwagon -- the quality of their spices is the best.

Ivonne, I feel the same way about your blog. And your photography makes me lick my lips!

Nupur, I'm inspired by your A-Z of Indian Vegetables posts on your blog. I'll definitely be adding more Indian spices to my pantry!

Hi again Lydia! Haha, me a photographer? I wish! :) But I like the fact that you experiment! I do, too, and not always to a happy end!